Survey Analysis: Methodological Sophistication, A Commitment To The Basics

National, regional, and statewide surveys are our bread and butter. At The Mellman Group, we pride ourselves on our ability to combine the most cutting-edge, sophisticated techniques in survey design and analysis with a commitment to the basics: producing timely, accurate results.

Through the years, The Mellman Group has earned a reputation as the most methodologically sophisticated political research firm on the Democratic side. This reputation is due in no small part to the sophisticated techniques we employ in analyzing survey data, including regression analysis, other forms of multivariate modeling, conjoint analysis, and experimental designs, among others. Suffice it to say that it is this methodological sophistication that brings most clients to us and allows us to assist them in designing the most powerful messages possible.

Our Research-Based Approach Sharpens Your Message And Your Strategic Focus

Some pollsters base their findings on what people tell them. Putting aside any thoughts one might have about the public’s honesty, years of research in psychology demonstrate that people are very poor reporters of their own decision making processes. Respondents will have an answer because they have been asked a question, but that answer does not necessarily reflect their real thought processes. At The Mellman Group, we start from the assumption that voters cannot tell us directly how they think. This requires us to use sophisticated techniques designed to uncover the structure of voters’ decision making processes. 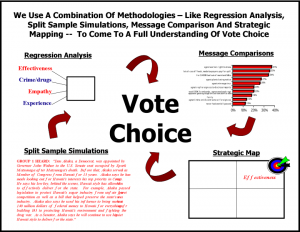 For instance, Logit and Probit Analysis (variants of regression analysis) allow us to determine the relative impact of any perception held by respondents on public choice.

For example, in our political work, we can use these techniques to accurately predict whether being seen as a strong leader or a good fiscal manager has a greater impact on the vote. The relative importance of these two items, as well as the twenty to thirty others we may test in a survey, vary from race to race. Using Logit and Probit modeling we can concentrate our efforts on the two or three most important perceptions that drive vote choice. We use similar techniques to investigate product choice.

Another example of the sophisticated techniques at your disposal is split sample simulation. This technique involves creating experimental groups from among our survey respondents to test the differential impact of possible messages. In essence, we create a “Psych 101” experiment within the survey. Respondents are randomly assigned to different groups, which are exposed to different possible messages. Split sample simulation allows us to compare the actual reactions of voters and consumers to various messages. Instead of asking respondents how they would react to various possible messages, we can see how they actually do react.